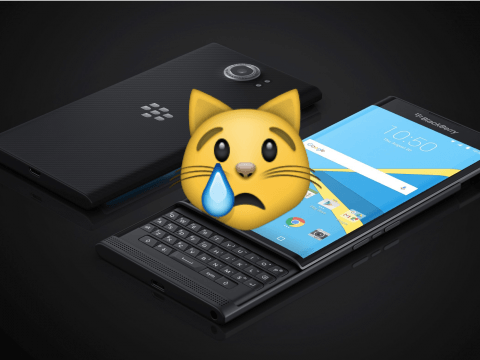 It’s a strange, somewhat melancholy experience replaying the video games of your childhood.

First, there’s that warm glow of nostalgia: I can’t believe I’m playing this again! But it can quickly sour as the game’s shortcomings, forgotten or missed the first time around, come glaringly into focus. These controls kinda suck. The graphics are awful. This storyline is pretty cliché.

I was reminded of this bittersweet sensation – nostalgia turned disappointment – when I found myself using a BlackBerry again this summer.

And having used one, I can see clearly why the company’s hardware efforts have failed and why it now plans to stop making its own phones altogether.

I had every reason to like the BlackBerry Priv …

II lost my phone in a holiday so I was forced to quickly search for another phone – and found an old BlackBerry Priv we had been sent to review in the office.

The Priv was BlackBerry’s last major smartphone. Launched in November of last year, it runs Google’s Android rather than BlackBerry’s proprietary operating system. It set itself apart with its huge sliding screen and full keyboard, like the classic BlackBerrys of old. (BlackBerry also launched the touchscreen-only DTEK 50 in July, but it hardly counts: It’s basically just a reskinned Alcatel handset.)

This keyboard was a shameless pitch to ex-BlackBerry owners who have deserted the brand for Apple and Google. Come back, we’ve got QWERTY, it’ll be just like old times! And to begin with, boy did I like it.

In my pre-smartphone days my primary phone was a Nokia E71. With a full QWERTY keyboard and internet functionality, it was basically a BlackBerry clone, and a good one at that. For all the joys of smartphone apps, I felt that the transition from physical keys to touch-screen typing was a retrograde step – so the BlackBerry Priv was immediately appealing.

But soon, the disappointment set in.

… but it was not to be
A physical keyboard on the phone was a novelty. But I came to realise it was a novelty I didn’t actually need. In the six years since I went touch screen only, the world has changed.

Innovations have transformed and streamlined the experience of typing on a touch screen – and chief among them, swiping.

If you’re unfamiliar, swipe-typing involves swiping across the keyboard from letter to letter without lifting your finger, the joined up letters forming words. It was pioneered by the likes of the UK startup SwiftKey and now comes baked into some Android smartphones. When working with a smart auto-complete, it’s a rapid way to write on mobile.

It’s actually, I realised as I started to use the Priv, much faster than physical keys.

I quickly became frustrated with the lack of swipe functionality on the BlackBerry and the clunkiness of the physical keyboard. This isn’t how I remembered it! Were manual buttons always this fiddly? Easily avoidable design mistakes made the whole experience worse – like the fact that the Shift button and the Alt button were in opposite positions on the physical and on-screen keyboards, meaning I’d be forever pressing one when I wanted the other.

BlackBerry was blindsided by the dawn of the smartphone age – and never recovered. In the space of a few years, it imploded from being the hottest phone around to irrelevancy. Its software didn’t appeal beyond a dwindling business base, meaning it didn’t get the kind of virtuous network effects that Android and iOS have whereby users encourage app makers to the platform, which encourages even more users, and so on.

And when BlackBerry made the switch to Android it struggled with the same fundamental problem as all Android manufacturers: differentiation. How do distinguish yourself from your competitors when you’re all running the same operating system?

BlackBerry’s answer was double-barrelled: unique software and, in the case of the Priv, backward-looking hardware.

But the Canadian company’s software wasn’t enough to persuade consumers to readopt a passé brand at an expensive price point. And on hardware, the world had simply moved on.

Ultimately, some things are better left in the past.