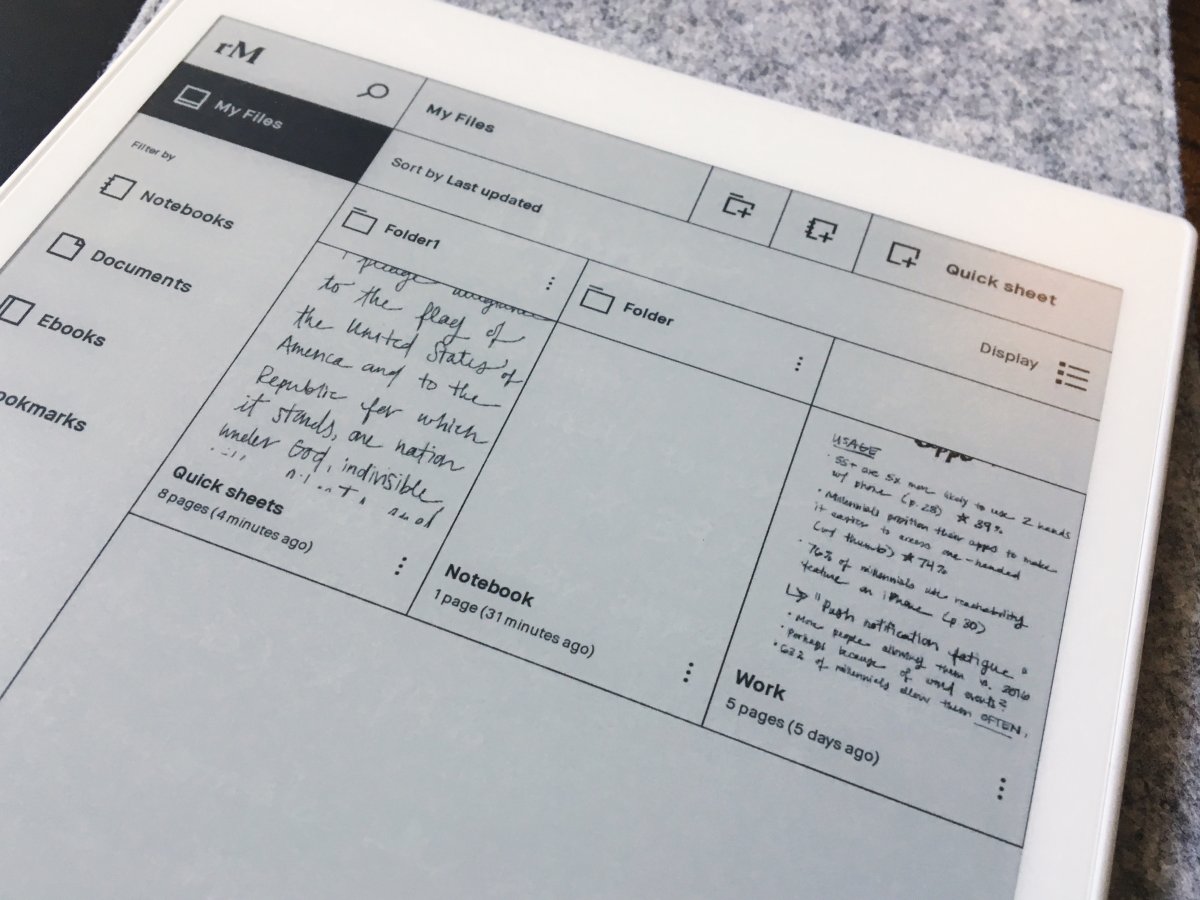 The new reMarkable tablet isn’t for everyone.

In fact, it’s specifically designed for an exclusive subset of people: those who prefer reading and writing on paper over using digital screens.

That mentality shines through when using the tablet, which is now in the hands of its first customers that have waited months to get their hands on the device.

The reMarkable tablet costs $599 and is currently being delivered to those who preordered the device — reMarkable says they’ve already sold 36,000 units. If you buy a tablet today, you should get it in October.

I had the chance to test the reMarkable tablet over the last few weeks to see if it stands up to its promise of being the top tablet for “paper people” and the most successful implementation of E Ink to date. Here’s what I found:

A specialty product for a very specific group of people

Let’s get this out of the way right off the bat: The reMarkable tablet costs $599.

For $600, you’re getting a tablet that doesn’t have apps and can’t play video. If you’re looking for a tablet that’s more a full-service computer replacement, this is not the device for you.

The reMarkable tablet is very much a specialty product, and it’s meant for a very specific group of people: Academics, designers, architects, lawyers — anyone who uses a lot of paper. It’s capable of downloading ebooks and sending emails as well as drawing and writing, but otherwise the tablet is an extremely focused device and certainly not for everyone.

I do consider myself a “paper person.” I’m someone who’s excited by the prospect of reading physical books and taking notes by hand. I stare at a computer screen all day for work, so by the end of the day, my eyes need a break from LCD displays. The reMarkable tablet uses E Ink, which is the same technology used in devices like Kindles and Pebble watches.

For that reason alone, I loved the experience of using reMarkable. It feels a lot like the early Kindles, but with a modern touches. Using it was a pleasant break from being constantly connected, and it was nice to have an excuse to doodle or write down to-do lists and notes.

The reMarkable tablet is about the length and width of a sheet of paper. It’s lightweight — it weighs a bit less than an iPad at 0.77 pounds — and could easily fit in a briefcase, backpack, or tote bag.

reMarkable is touch-based, but it also has three physical buttons on the bottom of the device. The middle button takes you back to the home screen, and the right and left buttons turn the page.

While I appreciated the physical buttons, it was here that I felt the design of the tablet fell short: The layout and size of the buttons makes the tablet look dated, especially in an age when companies like Apple and Samsung are removing as many buttons as possible.

One thing I really liked: The back of the reMarkable tablet is brushed metal, which helped the tablet feel more high-end.

The reMarkable tablet comes with a felted sleeve to protect it, which has a leather slot for the included pen. These touches help the tablet feel more premium and, design-wise, are chic and modern. So many other gadgets require you to buy a separate case, so the fact that reMarkable ships with a folio is much appreciated.

After using the tablet for a few weeks, I have mixed feelings about the user interface.

Like any new interface, using reMarkable took a lot of getting used to. But after several days, I was still a bit confused. The on-screen buttons weren’t always intuitive, and I often felt like I was blindly guessing what to push.

It wasn’t always easy to find the erase button or change the size of the pen tip.

For someone used to using Apple products, it also took time getting used to not having a mostly blank home screen. The tablet’s home screen is where all your files live, and frankly, there probably isn’t a need to have a more simplistic home screen on a device that can only do a few things.

Still, having the tablet open to the files screen was another feature that felt a little dated. For such a minimalist device, a minimalist interface would have made more sense. All the lines on the home screen made is feel like an old design to me. However, this may be a limitation of E Ink technology and not necessarily a purposeful design decision.

The biggest test of any E Ink product is the amount of lag. Something reMarkable worked hard on was eliminating lag altogether, which means that when you write on the tablet, you should immediately see it appear. Other devices have struggled with this problem in the past — when you try to write, there will be a split-second before you see it show up.

I can confirm that there is zero lag with reMarkable. I never once saw it stutter or glitch when writing and drawing, and if there is a lag, it’s indiscernible. reMarkable spent years working on this problem, and I can confidently say they solved it.

It’s immediately responsive regardless of how quickly you’re writing.

It works well for drawing and shading, and there are several types of pens and pencils.

But, there’s a downside

Something I noticed about the tablet right away was its tendency to “burn in,” or keep images faintly on the screen even after you’ve erased them.

I noticed this frequently with things I drew and wrote that I had manually erased, but I also noticed it with the loading button, a square that often showed up in the middle of the screen. That button (which is also slightly visible in the above photo), seemed burned into the screen most of the time, and would show up in the middle of drawings and notes.

The device is also just generally slow. It takes several seconds to move from page to page, and it often flashes in a way Kindle users will be familiar with. This is likely because of E Ink technology, but it’s frustrating at times. I could see the slowness with turning pages being an issue when trying to take notes quickly while in class or a meeting, but even for casual use it was extremely noticeable.

For $600, I wanted the device to be quick and responsive, and it simply wasn’t.

So, should you buy it?

I was excited about the potential of the reMarkable tablet, but unfortunately, it didn’t quite meet my expectations.

That said, I still think it’s an incredible product. The instantaneous nature of the ink is truly impressive, and every person I showed it to was blown away. The prospect of being able to take handwritten notes but save them digitally — not to mention sync them to your computer — is thrilling for those who prefer notepads over notepad apps.

But in making the quickest writing and drawing experience it could, I felt like reMarkable sacrified quickness on the other end. The device’s tendency to burn-in was a real problem, as was the slowness to turn the page or navigate back to the home screen. The tablet’s user interface still needs work to make it more intuitive, and the overall design could look slightly more modern. In its current form, paying $600 for an E Ink tablet like this in 2017 still seems too steep to me.

Still, I have every expectation that the reMarkable tablet is only going to get better and cheaper from here on out. For now, this is a solid start.