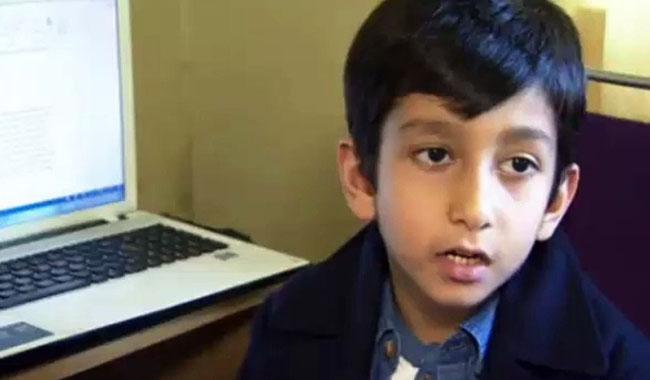 Mhammad Raza is not your everyday 11 year old boy. While his peers go to school, play cricket and scrape the occasional knee, Raza sits in front of a computer and codes. He builds softwares that can help catch most wanted criminals and create language predictors that no one in the market has been able to develop yet. Yes, he does go to school, but instead of English, Mathematics and Geography, Raza sits in on undergraduate and masters level courses at Lahore’s Information Technology University. And scores significantly higher than his classmates.

Raza was introduced to programming by a friend of his father’s who downloaded the programming language, GW Basic, onto Raza’s computer. Then began a process of self learning via YouTube videos. After seeing Raza’s affinity for programming, the same family friend later installed the coding language C to his computer as well.

He was nine at the time when his parents moved from Karachi to Lahore to set up a printing business which could not do well. Subsequently, financial constraints became a roadblock between Raza and regular school education.

Around the same time, Raza’s father saw a story on the news about a recently concluded robotics exhibition at ITU. Through a common friend, he met with Talha Rehmani, a faculty member at the university, and tried to convince him of his child’s prowess in programming.

Rehmani wasn’t impressed. But on the insistence of the father, he asked two of his research assistants to test Raza’s programming skills. “When none of them returned after an hour, I went to check up on them,” says Rehmani. “To my shock, both my assistants were sitting quietly while Raza kept talking about coding and that’s when I realized that there is something special about this boy.” It has been a year and half now since Raza started being mentored under Rehmani as his research assistant.

When Raza came to ITU, he already knew how to code. “The only hurdle was that sometimes he would not know the mathematics of specific coding. But once I explained what they were, he understood the algorithms quickly,” says Rehmani.

To further polish his talent, it was decided that Raza would sit through Computer Science classes meant for undergraduate and masters level students. The faculty had made sure that no leniency would be given to Raza in anyway so he could compete with the rest of the students on an equal footing. To everyone’s shock, in classes where the class average scores were in the 30’s, Raza’s were in the 80’s or 90’s.

One of his earlier courses at ITU was with Dr. Agha Ali Raza, himself a PhD from Carnegie Mellon University. “When I chatted with him I immediately realized that he’s brilliant. However, my only concern then, which remains today as well, is that he hasn’t gone through regular schooling and doesn’t get along with children his own age.”

Raza’s brilliance has not gone unnoticed amongst his peers. And not all of the attention is positive.

“He has an intelligent brain in an impatient body and keeps asking questions, sometimes not aligned with where the class is,” says Dr. Agha. This in turn creates tension in class.

Since coming to ITU, Raza has actively taken part in the annual Robotics Exhibition. Last year, he developed a Vision Based System (VBS) with facial recognition capabilities. This year, he has showcased an Urdu word predictor. It is similar to English word predictors in smartphones that give you a list of possible words after typing the first one or two letters. Raza has done the same in the Urdu language by using a 50,000 word corpus.

“Making an urdu word predictor is a difficult task as gender and tenses are hidden between words and sentences. This explains why there is no good predictor in the market currently. But Raza’s program has been tested using Mirza Ghalib’s poetry and it works well,” explains Rehmani. “This product will not only work as a predictor, but also as a transliterator. It can also convert Roman Urdu to Urdu letters in real time.

During a demonstration of the program to the author, Raza’s beautiful mind is plain to see. He whizzes through the explanation, with his tongue barely keeping up with his racing brain. To a question, he impatiently responds, “I just explained that,” as if the intricate code designed by him is easy to comprehend.

Later, when the demonstration is over, Raza reveals his real interest. “Mathematics – I like solving problems”.

However, Raza’s genius mind and an overly advanced programming skillset has come at a cost. Raza was enrolled in school twice but could not adjust with children of his own age. He was bullied by his classmates and unsurprisingly, by his teachers as well. Consequently, Raza lost interest in school quickly.

“This worries us,” says Rehmani. “Even if the child is a prodigy, he will not be acknowledged unless he has gone through the regular channel of schooling.” However, Dr. Agha explains that he and Rehmani have planned that at some point, Raza will sit for the Matric or O-Level and A-Level exams. Dr. Umar Saif, Vice Chancellor of ITU says that the University will undertake all that is required for Raza to reach his full potential.

Looking at the future, Raza does not want to conduct research for the sake of research. He wants to help take Pakistan forward and create softwares that are recognized globally. “He wants to make a difference for humanity at large. And this can also be seen through his previous projects like the vision based system to catch criminals. He wants to solve real time problems, and I think he will,” says Rehmani.